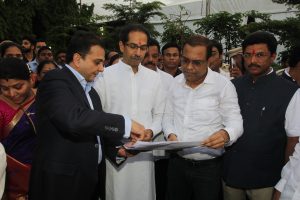 It is Spread over 20.5 acres on Kolshet Road, Grand Central Park, Thane and is designed along the lines of urban parks in global cities such as New York, Chicago, Singapore and London as well as some of the best parks in India.

This move is in line with the Thane Municipal Corporation’s vision of urban renewal through the creation of world class urban infrastructure.

The master planner is the Aedas, Singapore for projects such as Ghuanzhou International Financial Centre and the World Trade Centre, Jakarta.

Thailand’s urban design consultants Landscape Architects 49, which has done prestigious projects such as the Suan Ming Mongkol Park and Rama 9 Park at Bangkok, is the landscape architect.

Kalpataru has a strong bond with Thane, that stretches several decades. Its landmark projects, Siddhachal and Tarangan host vibrant communities adding to the colour and character of Thane. Its ongoing developments Immensa and Sunrise, situated within Kalpataru’s masterplanned township development on Kolshet Road will be home to thousands of families when complete. KORUM mall, promoted by Kalpataru Group, has emerged as a thriving shopping hub and community centre of choice for citizens from Thane and beyond.