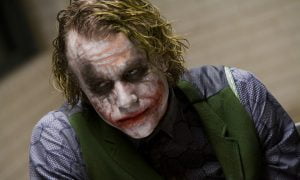 Heath Ledger was born on April 4, 1979, in Perth, Western Australia, to Sally (Ramshaw), a teacher of French, and Kim Ledger, a mining engineer.

As his story goes, in his junior high school it was compulsory to take one of two electives, either cooking or drama. As Heath could not see himself in a cooking class he tried his hand at drama. And, there seeded the very germ of an actor who was going to put a dent in the history of world cinema with the short but undoubtedly remarkable lifespan he has had.

As soon as he entered the stage on his first play of Peter Pan, though everyone in the faculties came to know how talented Heath really was the rest of the class did not acknowledge his talent.

The only reason I do what I do because I love doing it. So even if they called me not talented enough, I was in love with theatre by then. So, I wanted to carry on with it.

But in spite of being an underdog for his entire childhood, he kept trying to prove his mettle among whatever little audience he had then. 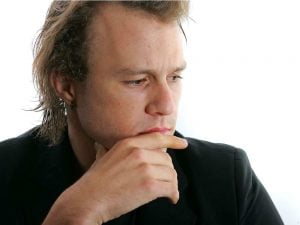 When he was seventeen he and a friend decided to pack up, leave school, take a car and rough it to Sydney. Heath believed Sydney to be the place where dreams were made or, at least, where actors could possibly get their big break. Upon arriving in Sydney with a purported sixty-nine cents to his name, Heath tried everything to get a break.

From 2000 to 2005, he starred in supporting roles as Gabriel Martin, the eldest son of Benjamin Martin (Mel Gibson), in The Patriot (2000), and as Sonny Grotowski, the son of Hank Grotowski (Billy Bob Thornton), in Monster’s Ball (2000). But what made him a permanent mark on the canvas of Hollywood was his final role as the Joker in the Christopher Nolan’s 2008 Superhero-drama The Dark Knight.

If you’re safe about your choices, you never relly grow!

The research that underwent to portray one of the most anarchist characters in the history of Hollywood cinema. 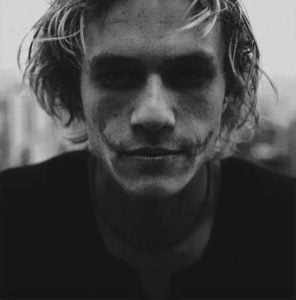 Heath didn’t attempt to play the Joker, he became ‘the’ Joker. His portrayal of Joker is still considered one of the best supporting negative roles in the history of global filmmaking and set standards that no one has yet surpassed.

For his research, Heath locked himself in a motel room for 43 days. This allowed him to feel isolated and alone with his thoughts and fulfil the craziness of Joker we all saw on screen.

Heath also gave Joker his own shades while not compromising on the core traits of the character. Heath had a natural habit of flicking his tongue, but he amped it up for the part of the Joker. It also supported with the way the Joker was required to sound, as the voice he produces requires him to have a humid mouth. 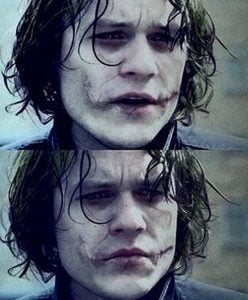 He also designed the entire get-up and make up for the character himself and the sadistic smile that was put on his face was his invention entirely.

In the scene where Batman interrogates the Joker, Heath had asked Christian Bale to actually beat him as hard as possible to achieve a sense of realness in the scene. And the reaction that was recorded on camera was real.

He also took method acting to another level by incorporating his inner madness and intuitive approach to remain spontaneous as the character was. In one scene where he blows up a hospital, he plays with the switches when the set technology stopped functioning. The camera kept rolling only to capture one of the most iconic scenes in the most iconic superhero movie ever made.

Heath Ledger also kept a Joker Diary. In it he wrote as the Joker and included a list of things he believed the Joker would find funny including blind babies, geniuses with brain damage, and sombreros. 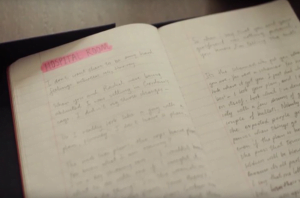 Naturally, this lead to rumours linking the actor’s tragic demise with the role itself; claims that Ledger either experimented with drugs to produce the Joker’s distinctive mark of craziness or that the intensity of the performance pushed Ledger near the mental illness, eventually climaxing in his reported drug abuse and overdose.

But, speaking at Tribeca Film Festival following the premiere of the documentary I Am Heath Ledger, the actor’s sister Kate dismissed those rumours.

I was really shocked, because that was him having fun,” she said. “Every report was coming out that he was depressed and that [the role] was taking this toll on him, and we’re going, honestly, it was the absolute opposite. It couldn’t be more wrong. He had an amazing sense of humor, and I guess maybe only his family and friends knew that, but he was having fun. He wasn’t depressed about the Joker!

But whatever be the case, Ledger died in 2008 having overdosed on prescription drugs. And, just before the kid who was once frowned upon in his junior school for not being talented enough as an actor gave the world the best version of the most loved super-villain along with making his own name indispensable from the very existence of the character.

His role in The Dark Knight was received with immense love both by critics and audience, with Ledger being awarded a posthumous Oscar for the best supporting role in the year 2009. 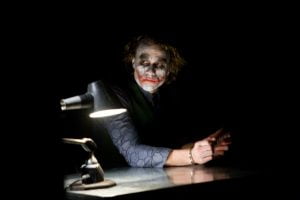 His death is still a conundrum as he became the character he is known for. The masterpiece he sculpted from scratch surely made him a person to look upon if anyone is saying that achieving greatness in as short as 28 years of an entire life is kind of impossible.

As the man in his prime, himself said:

It’s the last moment when people really show who they are!

As the legend he was always, he did indeed!