Before we proceed any further, let’s go through the dubbed morning prayer for any entrepreneur, which is Steve Jobs’ remarkable ‘Think Different’ campaign speech:

Here’s to the crazy ones. The misfits. The rebels. The troublemakers.

The round pegs in the square holes. The ones who see things differently. They’re not fond of rules. And they have no respect for the status quo. You can praise them, disagree with them, quote them, disbelieve them, glorify or vilify them. About the only thing you can’t do is ignore them.

Because they change things. They invent. They imagine. They heal. They explore. They create.They inspire.
They push the human race forward.

Maybe they have to be crazy.
How else can you stare at an empty canvas and see a work of art? Or sit in silence and hear a song that’s never been written? Or gaze at a red planet and see a laboratory on wheels? We make tools for these kinds of people.


While some see them as the crazy ones, we see genius.
Because the people who are crazy enough to think they can change the world, are the ones who do.

When Steve Jobs’ died, Apple hit its biggest peak in last 20 years by becoming the most valued company on earth. That prompted quite a few people to ponder on the actual impact of the “Think Different” ad campaign and the “To the crazy ones” commercial that began it all. 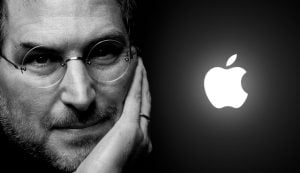 According to the creative director and managing partner at TBWA/Chiat/Day working on the Apple pitch alongside CEO and Chief Creative Officer Lee Clow:

Together, Lee and I headed up and actively participated in all of the work done for the pitch. I was also in every agency meeting with Jobs throughout the process — pre-pitch, pitch and post-pitch.

In writing this story, I’ve drawn from handwritten, dated creative journals I’ve diligently chronicled throughout my agency career as well as files I saved from the 1997 Apple time period (being a pack-rat often proves useful).

In these journals are countless pages of notes and concepts I jotted down during the process of trying to bring Apple back to prominence. I also found the original “To the crazy ones” television script I presented to Jobs, as well as a plethora of rough drafts.

As far as any conclusion goes, it is evident that Steve was actively involved with the advertising and every facet of Apple’s newly re-found business. But he was far from the mastermind behind the renowned launch spot. In fact, he was blatantly ungracious on the commercial that would eventually play a pivotal role in helping Apple achieve one of the greatest corporate turnarounds in business history.

But, it is his business co-peers who made the speech so impactful. Along with Steve’s vision to create a whole new dimension of technology, the marketing was one part he was not too good at.

Issac, the original author of Steve’s most illustrated biography says:

I have read many wonderful things about Steve Jobs and how warm and loving he was to his wife, children and sister.

His Stanford commencement address is one of the most touching and inspiring speeches I have ever heard. Steve was an amazing visionary, and I believe the comparisons of him to some of the world’s greatest achievers are totally deserved.

But I have also read many critical statements about Steve, and I must say I saw and experienced his tongue lashings and ballistic temper firsthand—directed to several others and squarely at me. It wasn’t pretty.

The think different campaign in its very original form was a debate over the round-table at Apple headquarters.

Due to his recent past, Steve had lost trust in any other person’s vision for Apple. That made him go to a verge of becoming a corporate dictator and it was the Think Different debate that made him realize that Apple was more than just Steve Jobs. It also needs to account and credit the opinion of its people who worked days-and-nights long for building the company from nothing but scratch.

If we go by the words of ex-Apple employees or the employees who were there during that phase, most of them have called it as a milestone which bought company together and for the first time convinced Steve to see the other reality- that has to be different from what he thinks.

This campaign didn’t talk about products, it about people. And that was the key point- Apple for the first time in a decade came anonymously to build a campaign that was anything but products.

This helped Apple (and Steve) to go deeper into the skin of people and them to realize how Apple relates to them. How they define the coming-of-age and with by what philosophy they stand.

In its very core, many talented and dedicated people played key roles along with Steve Jobs to build a company that would one day become the most valued firm on the globe, and that turnaround first began with an advertising campaign called Think different.