OYO on October 27, 2017, has while keeping Softbank at its back-end, clearly declared that they have finally rejected and closed all discussions around the acquisition of budget hotel room aggregator, Zo Rooms.

The news of the acquisition first surfaced when Softbank mentioned it in its earnings year-end report of 2015, which highlighted a point on ‘Acquisition of ZO Rooms’. 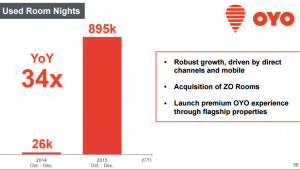 However, the news now has been escalated in a statement to the media and OYO updated it as:

In late-2015, WE explored a potential acquisition of Zo Rooms.

The non-binding term sheet for this deal already stands terminated in September 2016.

Following this, we tried to identify potential value in their business but could not reach an outcome.

We can now confirm that OYO has ended all discussions on the matter.

The deal was expected to be an all-stock deal, according to multiple sources, close to the matter.

According to media reports, ZO Rooms has accused OYO of resiling from the contractual terms.

A spokesperson was quoted as saying in Economic Times:

As a matter of clarification, ZO states that OYO is resiling from the contractual terms after acquiring the entire ZO Rooms business by March 2016.

This is not an act in good faith and ZO will take a very serious view of the matter and will take all steps to protect its interests and enforce its rights.

However, ZO has not stated how and when of their supposed legal approaches. It is interesting to note that this news of acquisition had surfaced when ZO was facing an extreme heat from its arch and richer rival OYO in the already dominated market.

But whoever be the winner of this forthcoming cold battle, this controversy breaking out now, has cleared that the conclusion to this saga is far from over.