Suppose you are landed somewhere where you haven’t been ever before and want a decent room. Tourist guides or brokers are always a pain in the ass and you are already so tired. So, you would open an app and book the nearest room that suits your budget. If the app is Oyo Rooms, this is the article where you will be visiting the life of its founder and CEO- Ritesh Agarwal, up and close! 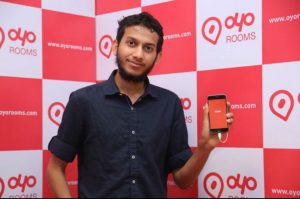 I was just this other guy who has stayed at numerous budget hotels himself– and was looted in the name of broker charges and misled in name of good rooms. So, one day it hit my mind that why not form something that can address this problem. Where people do not have to depend on anyone to find their stay even at an unknown place… where they can book their hotel rooms, on their own… OYO… On Your Own…

Says Ritesh who was just nineteen when he found the OYO Rooms.

Prior the young-adult entrepreneur had seen the rough patches of life when serving various sub-humble roles as a housekeeper, call center guy, SIM seller etc.

We are offering 70,000 rooms through our partners and plan to grow deeper in all key business and leisure cities, tripling our inventory by December 2017

Just about three years ago, he started off with a single hotel in Gurgaon. OYO took 11 of its 14 rooms.

When we talk about the academic qualification of Ritesh, he is one of those who graced the term- Dropout! He never went to a college and that might have been coming since he started selling SIM Cards as a Direct Sales Executive at the mere age of thirteen.

He got himself enrolled for University of London’s International Programme ISBF, Delhi, somewhere back in his mind always remained the idea of being an entrepreneur and developing his business. So, later he dropped out when he was seventeen years old.

Going to college opens doors for learning in a structured fashion. In my case, I was sure of my career path since I was young – I only wanted to become an entrepreneur.

says the young lad, who finds college not his cup of tea.

Ritesh’s father used to run a small business in Odisha but now works for a company. His mom is a homemaker.

I could see why travelers would not trust reviews and listings on a website to book in some other part of the country. It wasn’t unavailable but a mainstream structure was missing. I hit upon that part and it clicked with the customers.

After his college dropout, Ritesh was looking to develop an Airbnb-like business. But what he later observed was according to a data, 1.8 million Indian rooms are in unbranded hotels, compared with 112,000 in branded ones. Only about 2 percent of them are online. And, that is what OYO has cracked.

The rooms those were unutilized, where everyday Indian man would expect a stinky room with dripped sewage and water supply; OYO has taken and modified the same into a luxury package at a non-luxury price. It has given Indian customers a reliable and customizable stay option at a very low price and at his or her convenience.

Today, OYO is India’s largest branded network of budget hotels. It has over 5,500 properties in over 170 cities. So, we won’t be wrong if we can call it the Uber of Hotel Business.

And, about its founder- well… he became a millionaire at 22.