Share on Facebook
Tweet on Twitter
For a long time, Google’s and Apple’s self driving car projects were in news. But where Apple has not confirmed anything such yet, Google has now officailly hinted towards development of a fully automatic driver-less car.
A self-driving car by Google was duly displayed at the recent Viva Technology event in Paris, France. 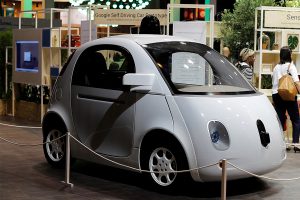 To support company’s indication, a small white car is also been seen driving automatically with no driver or any human inside whatsoever.

When asked, Google also reported the car being operated by the Future Urban Mobility initiative of the Singapore MIT Alliance for Research and Development (SMART), a partnership between the city state and the Massachusetts Institute of Technology (MIT) from the US.

But what is so special about it?

Well, the car does it all on its own, without the intervention of a human driver.

More so, Google intends to bring this revolutionary concept into the mainstream market soon, but doing so it will have to face some serious implications.

Some of the important implications that this unique automobile can bring will be:
– Drivers, mechanics and garages will need to reskill or reinvent themselves
– The cost to commute will become the ‘next telecom’ (virtually free, that is)
– Most cars will be made from recycled steel, as a result of which, ore companies and alloy makers will be impacted
– Fossil Fuel / oil-based countries and economies are likely to face crisis – the silver lining being, terror funding will considerably reduce
– Cash-rich automotive lubricant companies will discover there is nothing much to lubricate.

Volvo, Cadillac, Jaguar, Bosch and Tesla among other manufacturers are already being working on similar concepts.

These self driving cars, when they happen, can potentially change the adoption of on-demand, and transform the user behaviour in buying and using cars.

Driverless cars cut the cost and labour for cabs or other on-demand third party automobile service vendors, since there are no drivers involved, lower maintenance costs and lower accident rates due to highly accurate traffic handling capabilities which can mean cheaper insurance.

In addition, autonomous cars increase supply for on-demand services and create a significant effect in asset utilisation for a business model that caters to a relatively advanced but newer market segment.