Twitter which is the famous social media website turned 13 freshly and a lot of users on the internet ‘tweeted’ to wish twitter on its 13th birthday. Among them, there was an information website Wikipedia who was a special one to first wish Twitter on its extraordinary day. Wikipedia wished twitter by tweeting ‘Twitter was found 13 years ago on this day’ and also mentioned Twitter to be a youthful rebellious teen. Wikipedia not only tweeted about its birthday but also stated how it has grown and has produced new features since its birth.

Besides the birthday wishes, there was a classic crossover going on between these two networking sites where Wikipedia both praised Twitter for its fabulous growth and lightly made fun of Twitter about ‘not’ holding an edit button.

Wikipedia even relished the new word count limit of twitter with which they have been able to tweet in more than 140 characters, since 499 days. It also appended that it has been 1756 days since the font of Gotham has been added on Twitter. To all this, Twitter responded that they are delighted to notice that Wikipedia knew them so entirely.

Wikipedia again tweeted questioning whether it stills needs advice from old fogies like Wikipedia or not. Also, Wikipedia recommended it to add the edit option. One of the originators of Wikipedia, Jimmy Wales responded to Twitter’s tweet and said that Wikipedia knew everything. 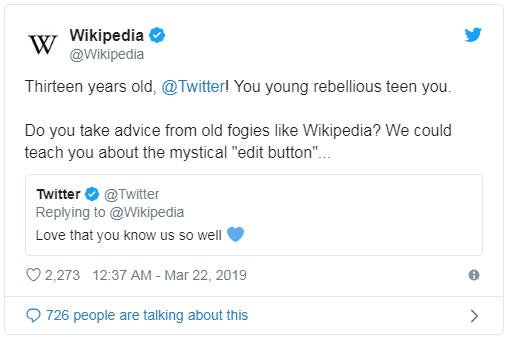 After this hilarious conversation between two, Twitter gained some assistance from the users in the form of wishes of the 13th birthday and their idea of not holding an edit button, Wikipedia also had a separate fan base, wherein its fans hollered that if Wikipedia didn’t know about something then no one would ever know. Well, Brands have always used Twitter wars both positively and negatively to involve users and defeat the others. But viewing Twitter do the same was clearly hilarious and above all the joking was exceptional!