Google.com was founded in 1998 by Larry Page and Sergey Brin while they were Ph.D. students at Stanford University, in California. Since then, it has been almost monopolistic when it comes to search engine usages and web-domination.

And today, Google has just turned 19!

So, let’s take a detour and move down the memory lane to see how the world’s biggest search engine has evolved in all these years (looks, at least):

1. This was the first prototype of Google, just before its launch.

Looked as basic as it could. Preliminary, actually!

Seldom did they know, that with this silly company name, it would soon turn itself into a daily-day verb for the common internet user. 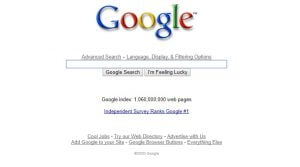 It was the first worldwide Google to be launched and most stable version of the website until the next update.

This time it was redesigned with a cooler approach with all these fancy background shadows and formatting. It was Java optimised and made mobile friendly for the very first time (remember, your old Nokia phones displaying this particular web page?)

And, the most functional update till date, came in 2010. 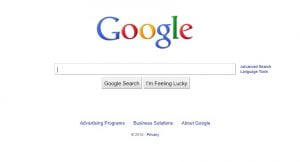 Years passed as Google grew up and in 2010 seven long years later, they updated the website into a whole operating system and added features like news, maps, videos etc. they also introduced Doodles, Apps, Single Account Sign-ins and Advanced Search Engine Optimization features to make searches more convenient and user-friendly. This was practically the dawn of a new and modern era of smart web-surfing.

It replaced them with a bolder and more minimalistic touch.

It was somewhat similar to going Arial from Time New Roman. Recently, Google has also come up with its digital assistant on board and this whole new calligraphy. Along with the fonts and functionality has also improved.

Now, this one darn website has not just created history, it has also given rise to an entirely new and unexpected future, that has practically pushed the entire human race forward. The giant has impacted our lives and, made it so much simpler. It has become so integral part of our lives, that we cannot even imagine a proper without it. So, today we can only wish this idea of a genius a very happy birthday and an even longer life.

We can literally Google anything we need today.

It has become such an integral part of our lives, that we cannot even imagine a proper working day without it. Therefore, today we can only wish this idea of a genius an even longer life.