Steve Jobs is dubbed as a visionary. And why not? The man has not only revolutionized the entire IT industry but also has changed how products are marketed for once and for all. 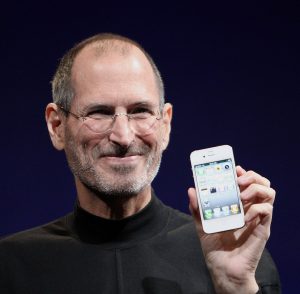 But how? Let’s find out:

The Customer Might Be The King, But I Am The One Who Is Right!

Steve believed that customers do not generate demands. companies make them do. It was synonymous with the core pohislosphy6 of Apple Inc. to innovate things. Steve always believed that as a company, Apple should remain at least 5 years ahead of the present market and create demand than to cater it.

There is certain hype and rumor before every Apple product is going to launch. And, Steve always remained opened to generate such hype. He believed anticipation of customers from Apple products make Apple so loved and innovating. And this hype would only sustain if they keep on giving secret clues to the market, at regular intervals, of whats’s coming next.

Steve always rocked the launch events with a brilliant presentation, a to-the-ground interaction with the audience and an interesting presentation of products and ideas. He involved his extreme sense of humor into his speeches and mastered the art of story telling during his launch speeches.

He believed that unless he can present his innovative products well in front of the entire world, people won’t buy them.

Marrying Beauty With The Beast

Every single Apple product is exquisite and a beauty to behold. Along with that, they have ground breaking technologies inside. Steve never compromised on ether of parameters because he insisted that an advanced device with no style is ugly, and a beautiful device with no tech is useless.

Steve Jobs always highlighted even the minutest thing of his devices in his keynotes and launch events.

Be it a layout change, or a minor software update, Jobs always dogged deeper and explained the entire process to educate his audience. According to him:

Little things matter the most!

And with these approaches, Steve Jobs laid the foundation of Apple’s core marketing baseline, which is still being followed by Tim Cook.

As, the present CEO of Apple Inc., Tim Cook says:

No one knew Apple more than Steve. The framework he created for marketing of Apple products is so beyond in time, that it is still been followed by us here!

And, here’s how he really summed up all of it when the first iPhone was launched: