Stories are the doorways to an entirely unique realm of delight and imagination. They awaken our souls, and make us reach out for more! And storytelling is the art to convey your stories.

A good storytelling can take us back to the ageless legends, myths, and even real-life incidents, making us feel and imagine different lives.

And there was a time when human interaction transcended technology and children were more engaged in outdoor activities.

But, today, machines have taken their toll over human activities and we have so less time to sit and listen to something as basic as a good story.

This problem of society tinkered into the eyes of
Smrthi Harits, a 22 years ‘young’ graduate who later has decided to solve this by reviving the culture from its very roots. 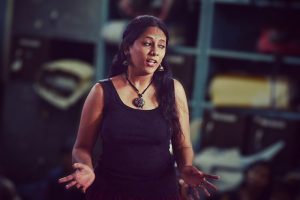 I grew up in a joint family. I still recall how I used to wait for power cuts so that the entire family could get together and play games like chowka bara.

But years later, I realized that this excitement wasn’t there anymore. My introduction to mathematics and several life lessons happened through games and stories.

I realized that today’s generation of kids is missing out on an important part of growing up. Stories, outdoor games, traditional board games we grew up playing have been replaced by PlayStation and mobile phones.

And to revive this long-lost practice of storytelling and bring about the required change, Smrthi founded Kagakka Gubakka.

Traditionally, culture and heritage are passed on by grandparents to grandchildren. In an urban city like Bengaluru, where nuclear families are on the rise, children do not get the upbringing we all took for granted in our days.

But her journey has not been a cake walk. On the day of their first meetup, none of the parents who had responded on Facebook really turned up. 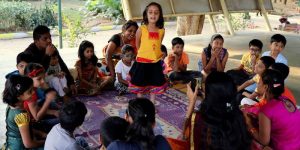 But just when she was about to leave, she noticed a bunch of kids playing outside the park.

I called the kids and told them that I’d teach them new games if they listened to the stories. They were our most loyal audience for the next six months.

Then, Smrthi kept on conducting her social entrepreneurial sessions- with and for these children.

After six months, the children left for their village and Kataoka Gubakka moved to its next location, Sankey tank, a manmade lake in the city with a beautiful space for children to play.

This helped Kagakka Gubakka reach out to a larger audience.

Today this unique startup has raised a hundred kids and incorporated the seed if storytelling and seeded the essence of Indian literature into their younger hearts. 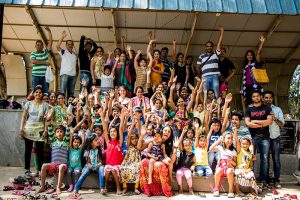 As we say, and try to define development in our own ways, this little practice that Smrithi has evolved can be one of the most beautiful of them!