Rakesh Jhunjhunwala has recently got even richer by more than Rs 875 crore in a single trading session after Titan shares rose yesterday on the tail of cosmic Q2 results.

The master investor holds more than 8.02% stake in the company as at the end of September quarter, rendering to 715,86,220 shares, data registered with BSE confirmed.

The scrip closed at Rs 657.4 on Friday, and mounted to a 52-week high of Rs 824.65 before finally ending at Rs 780.3 on NSE on Monday. It is to be noted that Rakesh Jhunjhunwala would have to actually sell his situations to actualize the profits. Valued at the closing price on NSE, his stake in the company translated to a little above Rs 5,500 crore.

Just last month, Rakesh Jhunjhunwala had revealed in an interview to ET Now that Titan is his favourite stock.

Titan Company Ltd had reported a whopping 67% rise in net profit to Rs 277.93 crore for the quarter ended September 30, 2017 against Rs 165.98 crore in the identical quarter last year.

Jewellery segment, which contributed to nearly 80% of total revenue, has registered a solid 37% growth at Rs 2,748.20 crore on year-on-year basis, with its EBIT (earnings before interest and tax) growing 66.4% YoY. Despite such stellar numbers, Rakesh Jhunjhunwala quizzed the Titan Company management on an earnings call on Friday. 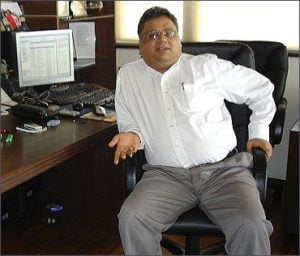 In the wages bell, the man himself asked:

Last year the entire festive season was in October. This year it got split between Q2 and Q3. There was 55% growth in that season – the base difference was high up to November 8. The base effect was high up to 8 November. After that, there was a trough and we got pulled back by our own exchange schemes.

Rakesh Jhunjhunwala also sought clarification on the wedding season in November and December, and whether it could lead to higher growth in the coming quarter.

Last year we didn’t have rich wedding season and nor did we have a focus on the wedding as we have today.

There was intense pressure from the government on the PMLA re-introduction. We don’t know how that is going to go and at what level they are going to cut it from Rs 50,000 and take it up to what level.

We had a 180 store month target, my assessment is by the time March 3st happens we could achieve 80% of that target.