WhatsApp’s farewell announcement for 2017 is not a satisfying news for some smartphone users. WhatsApp will reportedly, stop working on devices running BlackBerry OS, BlackBerry 10, and Windows Phone 8.0 and older from December 31, 2017.

The WhatsApp blog post with end-of-life dates clearly mentions that users of BlackBerry OS, BlackBerry 10, and Windows Phone 8.0 and older operating systems will not be able to use the app after December 31, 2017 – less than a week from now.

To recall, WhatsApp had extended support for both platforms in June this year. At the time, WhatsApp had also revealed that the app will stop working for phones running Nokia S40 will be stopped from December 31, 2018.

The app will stop working on phones running Android 2.3.7 and older (Gingerbread) will be stopped from February 1, 2020. 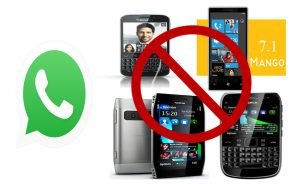 Ending support for Blackberry and Windows Phone has seen no further extensions and will come into place on the mentioned date.

If your phone has any of the two specified operating systems, you should consider upgrading to a newer phone in order to access WhatsApp properly.

WhatsApp, earlier this month, officially took covers off its new standalone app for businesses, which features both verified and non-verified profiles.

This gives vocations a conventional plot to convoy business on the instant messaging app.