Mercedes Benz is one of the few brand, which carries its branding like a medal. Your eyes are ought to turn with awe when you catch the glimpse of a car running across carrying the three axis metal circle embossed over it.

But the nomenclature this alluring brand has its own story. The ideation of Mercedes Benz was actually the wish of a daughter to her father.

In 1901, Emil Jellinek (a big businessman of that time) planned to buy 36 odd cars from Daimler-Motoren-Gesellschaft (founder of Mercedes).  But when Emil was demanded by his daughter Mercedes Jellinek (on her 11th birthday), that her name be given to the entire lot he was planning to buy from Daimler, the name of the most iconic car brands in human history had been devised.

Upon his client’s demand, Daimler used the Mercedes name for most of its cars. Eventually, Dailmer grew fond of that name and later in 1902, he registered it as a trademark.

Earlier, it was just an oval Word-Art spelling with a a black background color. The modern triple axis logo came much later in 1909.

By then, to maintain the brand value and create more impact on the customer, Daimler changed his family surname to Mercedes.

On 28 June 1926, when Benz formally merged with Mercedes it was legally agreed that every individual factory would use the Mercedes-Benz brandings on their automobiles with the iconic triple axis brand logo. 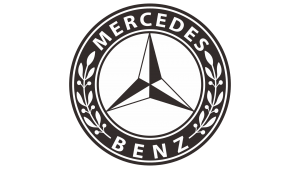 Moreover, that triple axis logo has a meaning. The three axis represent three forces of the universe- air, water and land, which combines form one circle of life.

And, though Mercedes now comes in various colors, silver was the default during its initial days. So much, that it dubbed its first Formula-1 car as The Silver Arrow and later silver also became the standard color for its logo and is even continued.