There were times when the entire publishing industry was either biased or rejective to new-born talents in literature.

Where on one side, established authors were continuing to hold their anchors and make a living, lots of new coming authors were unfortunate enough to not being able to make it into the world of Indian English Literature.

Though the emergence of several coming-of-age authors and their success stories beckoned a path to be followed, there was still a gap of proper mentorship and quality control. Because, the new authors were somehow needed grooming to deliver the content, Indian Literature was demanding. And what it really required was a well-driven platform.

Seeing that potential area of improvement, Times Of India, the major media giant of India, initiated a special hunt for India’s fresh writing talents in the year 2015, called the Write India Campaign. 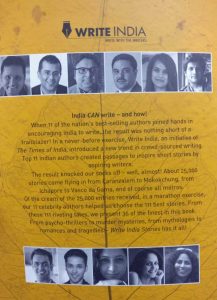 TOI ensured to provide maximum exposure to young talents and carve their work with the best minds in the country.

So, the first year of this campaign included big names like Amish Tripathy, Chetan Bhagat, Durjoy Datta, Preeti Shenoy, Ashwin Sanghi along with many other veteran names. 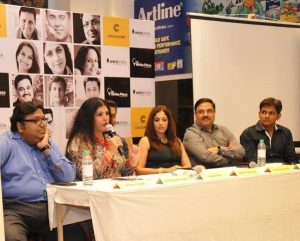 The campaign invited the young writers to write one short story based on a plot determined by respective mentoring authors. Upon selection (based on the merit of the creative writing) each writer would get an opportunity to become a published author under the guidance and grooming of the listed names and more.

The first round of this grand initiative was well received and fetched immense success with around 1.5 lakh registrations and 25,000 short stories received in a span of 11 Months. It discovered top writers from across the country and 36 winning stories were published in the form of a book in November last year. The winners are in the picture below: 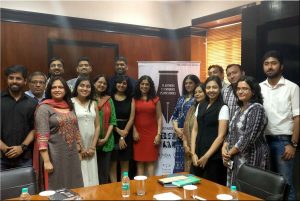 You can also check the list of winners of the first TOI Write India Campaign, here.

Now in 2017, TOI is again here with the same objective and mission but even grander in its approach.

The hunt for India’s fresh writing talents has already begun with The Write India 2 Campaign.

Times Internet, and star authors like Jeffrey Archer and Ruskin Bond, are all set to uncover India’s story-telling potential in the second season of Write India campaign.

As it is already proven, the Write India is an unprecedented crowd-sourced short story contest for which TOI sets up an eclectic line-up of world-renowned authors to inspire, encourage and evaluate budding writers and amateurs. 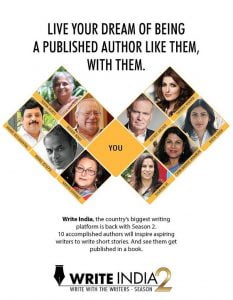 The entire campaign will run for a period of 10 months, until 30 April 2018. Each month, one of the celebrity authors will share a passage for budding writers to weave a short story around, stories will be curated by Write India team and then, top winners will be selected by the author of the month.

To begin the campaign on a high-note, Anand Neelakantan, author of the famous Bahubali trilogy, has been announced as the author for the month of July.

And just like the previous season, the winning stories created during Write India campaign will later be compiled into a book and published by TOI. At the end of the year, TOI will also organize a workshop for the winners where they will be mentored by the aforementioned celebrity authors.

This would not only ensure a headstart to the writing career of the selected aspiring writers but will also gift them with unmatched exposure and developed skills, nourished, brushed and clayed in the hands of biggest names of Indian English Literature.

So, now (thanks to this wonderful initiative by Times Of India, and its alliances) we do have one platform to showcase our unseen creative abilities and make an identity of our own under the lights of such big names of literature.

So, is it wise to wait for any further or just log on to www.toi.in/writeindia to submit our stories and live the ever-seen dream of becoming a published author?