Mahatma Gandhi has become a regular topic of debate on social media. One group says he is all mighty honest and honored man whom we have read and bought up for our rest of lives and another says he had some lifestyle issues that contradicts his publicized public image. 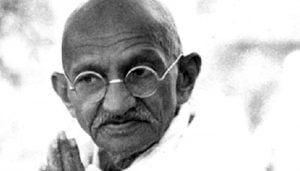 But as far as reported history is concerned this man has been the prime architect of India’s freedom. So today on his birth anniversary, we intend to debunk some of rumors and myths about Bapu and try to put a genuine light on his character which has now been put into arguments and debates. 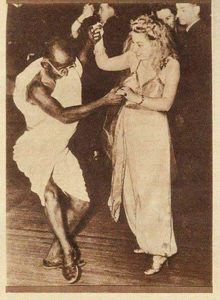 This is not Gandhi dancing with a foreign lady. In reality, it is an Australian actor who was dressed up as Gandhi and doing that part. Two confirming facts:

A. The man in picture has rather beefy arms as compared to the leaner ones that Bapu really had!

B. The footwear: Man wears a footwear that is quite unlike Gandhi’s. Given that, it is an accounted fact that Gandhi always wore a single set of footwear or of the same design for his entire life. 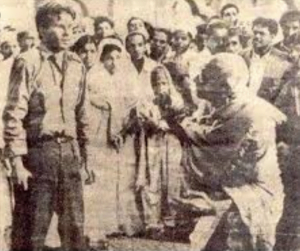 Moreover, we have the original picture of the Gandhi-slayer Nathuram and that is definitely not the man in that picture.

Actually, this is a scene from the movie “Nine Hours to Rama” in which a German actor named Horst Buccholz played the role of Godse.

People go so far with their vivid imaginations.

The real photo is of Gandhi talking to Nehru.

The quote is sensible and can be related to Gandhi, but has not been said by Mahatma Gandhi. Rather it was just attributed to him.

There is no recorded or documented instance of Gandhi saying this, but a close figure of speech first appeared in a 1918 US trade union address by Nicholas Klein.

2. Interviewer: “What do you think of Western Civilization?” Gandhi: “I think it would be a good idea.”

Lack of credibility again. There is no certain evidence of Gandhi saying this.

Moreover, the earliest documentation of this quote comes a good 20 years after his death.

So, on a note of conclusion: Don’t just believe anything that goes around on the digital media. Buy facts only after they come from reliable sources or has enough credibility and evidence in support.

As a wise man once said:

Using social media to hurt and destroy is callous, acted out by cowards hiding behind computers. My advice is to ignore negativity. Focus on the love around.