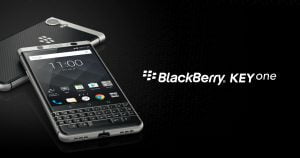 Blackberry has announced the launch of its KEYone smartphone in India as an Amazon-exclusive handset which is priced at Rs 39,990. It has been launched in association with its manufacturing and distribution partner Delhi-based Optiemus Infracom. Optiemus will be selling the devices in India, Nepal, Sri Lanka and Bangladesh. The smartphone will go on sale starting from August 8.

Specifications – Blackberry KEYone features a 4.5-inch display with 1080×1620 pixel resolution and screen is protected with a scratch resistant glass. The device is a 2GHZ octa-core Qualcomm Snapdragon 625 processor paired with the memory of 3GB. It weighs 180 grams and measures 149.3×72.5×9.4mm. The smartphone has a 12MP rear camera with dual tone LED flash and 8MP front camera with flash.

The smartphone is backed by a 3,505 mAh battery with Qualcomm Quick Charge 3.0support, which is said to charge from zero to 50% in just 30 minutes. While the international variant comes with 3GB of RAM and single SIM support. It offers all the security features found in other Blackberry devices.

Physical QWERTY keypad and software features are the key highlights of Blackberry KEYone.