Sunny Leone is trending again on social media. This time it is not because of her hot photoshoots or promotion of films, but because of the results of an examination. Indeed, her name is in the ‘Junior Engineer’ (Civil) Merit List. This news is circulating across the whole internet with the screenshot of the result. People on social media are surprised why Sunny Leone is leaving the fame of the Bollywood industry and joining the position of junior civil engineer under the department of Bihar government?

For the vacancies of Junior Civil Engineer posts in the Public Health Engineering Department (PHED) under the Bihar Government, a long list of online candidates was made. About more than 17 thousand candidates registered for this job on the PHED department’s website. The list of registered candidates is released now.

The result of this examination is released, but some shocking yet funny things are revealed which is quite trending on social media. According to the results, Sunny Leone has grabbed the first position in the examination by getting 98.5 marks which is an amazing score. According to the list of official results, this candidate is the daughter of Leona Leone (father), whose application ID is JEC / 0031211. Whereas her user ID is 2AVRCWCT.

Around 17991 people applied for this recruitment for just 214 vacant posts. Well, other than Sunny Leone in this list, there is another name which attracted people’s attention. This name is “bvcxzbnnb”. According to the list, this candidate has managed to secure the third position in the merit list. This candidate has got 92.89 points. This candidate is the son of “mggvghhnnnn”, whose application ID is JEC / 0012749. Whereas his user ID is YE53SSD6. 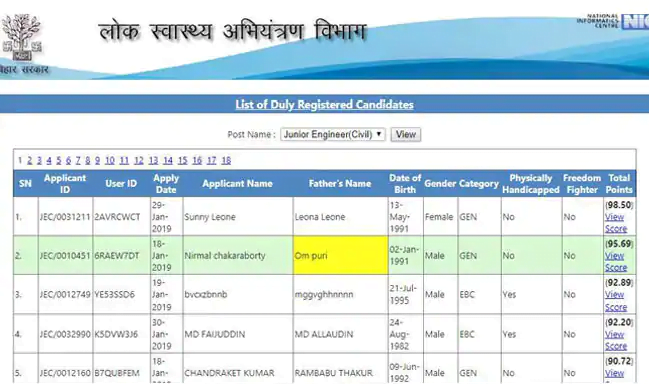 Sunny Leone, with 98.50 points in this list, is said to be the topper. The special thing is that this Sunni Leone is being passed from the general category and the name of his father is even more strange and perplexing. Whereas “bvcxzbnnb” is from EBC category.

For your information, this examination was conducted on different dates from January 15 to January 31. Candidates can check their Result on the PEHD department’s official website at phed.bih.nic.in. It is still unknown whether why such a mistake has been done by the officials of the Bihar government in releasing this list. However, no official clarification has been given by the examination governing officials. This news has circulated on social media and people are giving different funny opinions on this.