Ranjit Singh Boparan is an August-born British businessman and the founder of 2 Sisters Food with his wife Baljinder Kaur Boparan.

Boparan is also called the “Chicken King” in the West Midlands.

But for Boparan, this success wasn’t backed up by any academic degree. So it naturally comes as hard to imagine that one day he and his wife will amass fortunes worth £190 million and an empire of £1.65 billion.

Residing in West Midlands, he began expanding his firm slowly through its parent company Boparan Holdings. Even though a business mogul of huge proportions, Boparan is down to earth and does not like media footage.

Media creates unrequired attention and makes your peace vulnerable. Not too good for me.

2 States Food Group started off as a frozen retail cutting operation and has grown with time into 36 manufacturing sites in various countries like Netherland, Poland, and Ireland.

One of their big milestones was their merger with Greencore, an Irish meals supplier company, which raised their shares by almost 20 percent.

After growing into 25 percent shareholdings of the company in 2011, Ranjit announced a £341 million deal to buy Northern Foods, which made Ranjit as the company’s chairman in April 2011.

Boparan Holdings primarily concentrates on training and development of their manual labor and make sure they maintain a superior quality in animal welfare and food safety aspects of the business among their partners and suppliers. 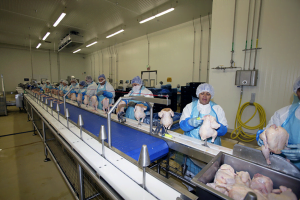 In 2015, Ranjit was given an honorary doctorate by the Nottingham Trent University, for his significant contribution to the food manufacturing industry, to education and the development of his workforce, and for his philanthropic interests.

From being a school drop-out to butcher’s assistant to receiving an honorary doctorate degree, Ranjit time and again proved that merit doesn’t reside in a certificate but the character of a person.