A strange situation occurred on the Go Air flight when a pigeon suddenly entered from nowhere inside it. 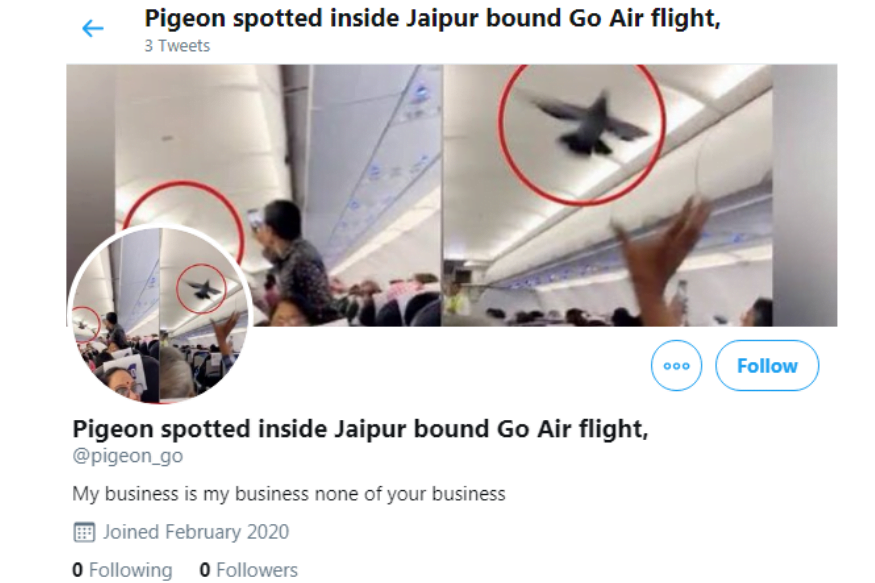 The matter is of Ahmedabad Airport on 28th February. On Go Air’s flight G8-702, just before take-off, a pigeon came and started flying around. However, the crew members with the help of ground staff quickly removed the pigeon outside.

An unwanted passenger boarded on #Jaipur-bound Go Air flight from #Ahemdabad. On opening the luggage shelf a pigeon came out and started flying there. The flight was supposed to land at Jaipur at 6.15 pm but landed with a delay of half an ho pic.twitter.com/eBYKzB09ni

Due to this unusual yet funny incident, the flight got 30 minutes late. After this, the airport authorities and airlines expressed an apology to the passengers for this incident. Due to flight delay, the flight reached Jaipur airport at 6:45 pm instead of its scheduled time of 6:15 pm. According to one passenger, ‘All the passengers were sitting on the plane. As soon as the flight doors got closed, a passenger opened the luggage shelf to keep his belongings and found a pigeon sitting in it. The pigeon created a scene inside the plane.

“Even pigeon can fly inside a GoAir flight, but not @kunalkamra88.”

Twitter took off with jokes as video of a pigeon flying inside a plane went viral. https://t.co/fAyhCmPqxL

Passengers made the video of the entire incident in their mobile phones and uploaded it on the internet. Soon this video became viral on social media. People started creating memes on this incident and even demanded the airlines to issue boarding passes to the two unexpected guests. Some people also trolled comedian Kunal Kumra over his flight ban.