Nelson Rolihlahla Mandela was born on July 18, 1918, in Mthatha (formerly Umtata) in the Union of South Africa.

Originally, he was brought up with his two sisters. When his father passed away when he was around nine years old, Nelson’s mother delivered him to continue with Chief Jongintaba, of the Thembu people in Mqhekezweni, who toiled as his guardian.

Nelson attended Clarkebury Methodist High School, before commencing a Bachelor of Arts (BA) degree at the University of Fort Hare.

Later, Mandela shifted his involvement in politics by heading a Students’ Representative Council boycott against the quality of food. For this, he was temporarily barred from the university for his first year and he then dropped out without even receiving a degree.

Mandela then moved to Johannesburg and enrolled in a correspondence course at the University of South Africa to continue working on his BA, which he completed in early 1943.

Thereafter, Mr Mandela started to cram Law at the University of Witwatersrand and, in 1944, became more frequently involved in politics. Later he became an executive committee member of the newly founded African National Congress Youth League (ANCYL). By 1947, Mr. Mandela was elected to the executive committee of the Transvaal ANC.

In 1948, when general elections were held, only whites were able to vote. A new openly racist National Party was formed that expanded racial division through formal apartheid legislation.

Mr Mandela became more involved in direct action against apartheid including strikes and boycotts and was elected national president of the ANCYL. 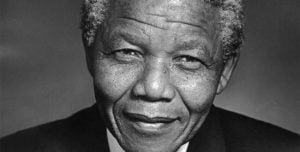 By 1960, the ANC was banned and Mr Mandela had been arrested upon more than one instant for activities linked to demanding his and others’ fair civil rights.

When Mr. Mandela returned to South Africa he was jailed on charges of treason and collusion to forcibly overthrow the government.

Mr Mandela admitted to supporting sabotage to make his political views known and was sentenced to life in prison on June 12, 1964.

Mandela was sent to a prison on Robben Island, where he remained until 1982. Although Mr. Mandela was effective to receive more visitors and letters in prison by the mid-1970s, throughout his entire time at Robben Island he had to interlace in hard labour, sleep on a straw mat, and be confined to notable shares of every day to a meagre cement cell.

After 18 years of imprisonment on Robben Island, Mr Mandela was transferred to Pollsmoor Prison in Cape Town, where he remained until 1988.

Mandela had already turned 70 years old in Pollsmoor Prison and a few months later was transferred to Victor Verster Prison where he was housed in relative comfort from December 1988 until February 11, 1990. While at Victor Verster Prison, Mr. Mandela consecutively completed his Law Degree.

After he was finally released from prison, Mandela toured Europe, Asia and the Americas, meeting with heads of state and encouraging them to support economic sanctions against South Africa until there were free and fair elections in which all people in his country could participate.

Nelson Mandela was inaugurated as South Africa’s President on May 10, 1994. Although he was now President, Mandela lived simply and donated one-third of his annual income to the Nelson Mandela Children’s Fund, which he had founded in 1995.

President Mandela died on 5 December 2013 at the age of 95. His death was mourned worldwide and many called it the end if an era of peace and closure of an end-chapter of justice.

Nelson Mandela did not view the liberation of his people in withdrawal. He observed the grief of people anywhere as unsettled and as needing to be addressed. He believed in the forgiveness as the prime-most power to keep moving forward, healing, and do nation-building. Due to this mindset, he is widely viewed “the father of the nation” and “the founding father of democracy” within South Africa.

His fond mentality and approach to the socio-economic justice have been often equated to other great leaders like Abraham Lincoln and Mahatma Gandhi. His life has been celebrated on film, in song, through commemorative statues, and in 2009 the United Nations naming July 18th as a day in his honour.