To establish oneself in a community and fetch an identity of your own is a tremendous task in itself, let alone planting a seed of success in some other.

Similar is the extraordinary story of Monica Liu who is now also dubbed as the ‘Don of Chinatown.’

Monica is a living testimony of courage and power of determination. 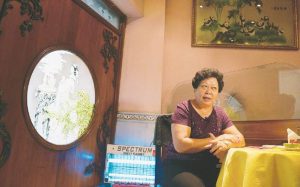 Her willpower is so strong that no setback has been strong enough to hold her from flying high and hiking her mast of success that too in an entirely different community.

The woman has faced hardships far more than many of us and her courage is something which one can only dream of.

The protagonist of this story has lived the life of a refugee in her own country and was deprived of even the basic rights for a long span of time.

Her connection with India started when her father,
Leong Tonseng, came to India from China when he was merely 14-year-old in search of work.

The financial condition of my grandparents was not good and they were old and
ailing.

As a teenager, my father had heard a lot about employment opportunities in India, so he decided to come to Kolkata where his distant uncle lived.

In the 1940s, her father used to earn as low as INR 50 per month and send back whatever he could save. Later he got married to Wong Mei Yong in 1950 in China and both of them returned to
Kolkata where Monica was born in 1953.

My father’s salary from the shoe shop was
not enough to run a family.

Everything was already going at a slower pace when a sudden shock came to distort their foundation even further.

Her father lost his job because of an argument with the boss. This was a catastrophe for
a family, which was already struggling for its survival.

So they decided to move to Kalimpong in the same year and opened an eatery with the little fund they had saved.

My mother breastfed me for a long time to save money. We could not afford milk.
The purpose back then was to save as much money as we could.

It was a very small rented shop where we sold thukpa and some Chinese curries.

The livelihood was inherently not sufficient to take care of their needs but it somehow kept them alive.

But just when things had started taking shape another news shook them upside down.

Due to the on-going tension at Indo-China border, they had to move again from Kalimpong leaving
behind all the everything or the little, they had accumulated.

Our eatery business was dependent on people who came from Tibet to shop for everyday household items as they were cheaper here, but now the border was closed and our business collapsed.

All these occurrences were devastating enough to consume their last ray of hope, which it did
for a period, but somehow they decided to hit back again. A family friend rented out his plot to them where they started again with full zeal.

This continued till 1962, by which Monica had four more siblings.

My school in Shillong was 8 km away and my father would give me four annas TO cover one-way travel expenses for me and my sister.

While returning, we just used to walk. I realized the value of money back then– something I’d never forget.

Eventually, during the war of 1962, they strived for the least of their livelihoods.
It was a cold November day when the Indian soldiers asked them to pack whatever they could and were taken to Jaipur where there were already 20,000 refugees in Deoli city in Tonk district.

This was a nightmare as several people died because of poor resources and starved nights and nights long.

In 1968, when Monica was turned 15, she had already stayed in the camp for more than six years.

And it was then when she took a bold step and wrote to the home minister without caring for the consequences.

She was tired of living like a prisoner in her own home. Luckily, her letter had a moving impact on the government and they decided to free the captives after visiting them.

Then they moved back to Shillong where a friend
rented them 300 square feet room to live for INR 125 per month.

Monica married Liukuo Chao in 1971 who had a leather business in Kolkata.

She had a child the following year and then two more by 1976.

She then began to sell chemicals of leather to
support the growing family.

Meanwhile, her brother got married and started his own salon.

This inspired Monica to take a loan of Rs 2,00,000 from a friend and start her own salon.

It was doing well but she had to quit as her children were growing up. But, by this time the entrepreneur in her had hit her conscience.

In 1991, she started her own restaurant, but on a larger scale than her parents.

She opened Kim-Ling, her first restaurant in Kolkata in 1991 by taking a loan from friends and family.

I did not have land or property then so couldn’t take a loan from a bank.

My mother, brother, sister, husband, daughter and I did all the work.

Soon she started earning Rs 1,500 per day which grew even more over the years.

But as they say, when you rise many of them start pulling you down. Something similar happened to Monica as well. Some local goons started harassing them after her restaurant started flourishing. But she had already seen the harsh part of life so the brave woman beat the shit of them, and reported to police who took them in custody and put behind bars for next 3 years. And thus Monica became the ‘Don of Tangra (Chinatown)’.

In 1993, her second restaurant Mandarin was opened for which she took a loan of Rs
20 lakh. Beijing, in Tangra, opened in 1998 with an investment of Rs 50 lakhs.

Today, she employs over 250 staffs and her restaurants are never seen without ques.

She was given women entrepreneur award of the year in 2003 by the Calcutta Club.

If you know how to work hard and struggle, you can achieve anything in life.