Mariyappan Thangavelu lost his leg at the age of five. Years later in 2016, he won a gold medal in the men’s T42 high jump at the age of 21 on the second day of Paralympic games in Rio De Janeiro.

And we are here to tell you what happened in between. 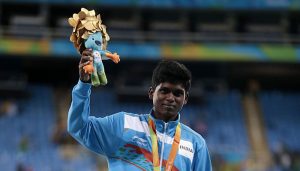 Birth of a Crippled

Mariyappan was born in Tamil Nadu and his mother Saroja, sold vegetable. His father had abandoned the family a decade before.

So, he was poor and the family wasn’t well to do.

But, Mariyappan was not born handicapped. It was just another day for the five years old kid when he went outside to play with his friends. But suddenly, a state-owned transport corporation bus hit him and so he lost one of his hind limbs.

His family was so broken that they filed a case against the driver and are still fighting it despite knowing their son’s leg couldn’t be resurrected.

But what added to the kid’s misery was that after that day he also became an odd one out in his friend circle.

He felt a sudden blow of anxiety and inferiority complex.

Mariyappan’s mom was a kind soul. And she loved him with all her heart.

Mariyappan was also not held back his loss. He used to excel in sports regularly and his mother was always supportive of his activeness in sports.

This instilled him with enthusiasm and thus he won many medals at both school and college level.

Mariyappan also completed his BBA eventually and started searching for a regular job in the same expertise.

Alongside, Mariyappan’s coach Satyanarayana trained him for his games and advised him to keep aiming bigger than the biggest.

Later when he participated in the Paralympics 2016, he fetched our country a gold medal.

Upon this his young brother Kumar said-

We were watching live, the event. At precisely 2.52 am, my brother leaped to a gold medal. And for a minute it seemed as if it was a dream, but no it was for real. My brother was standing on the podium with the medal…We always were confident he would win a medal. And his coach was sure that he would get a gold.

Mariyappan had seen miseries all his life. From the loss of his father to the loss of his leg. He saw his mother selling vegetables and poverty was what he had borne in.

So, his victory was not just an Indian’s triumph but a win for his entire family which was so overwhelmed that they burst crackers and distributed sweets in the village, as the neighbors came running to their one-room house for which they pay Rs 500 per month. It was a euphoria combined with pints of joy and pride that this crippled man had brought for his family and the entire nation.

Periya Karuppan, the district sports officer felicitated Mariyappan and his coach Satyanarayana with a promise to get this young lad to the feat and fame he truly deserves.

Despite losing one limb, Mariyappan won gold for his country. This shows that the body is just an instrument which only the mind can put into use.

He had the choice to sit back and cry for his unfair life but what he did instead made him what he is today.

One is only as crippled as much as his willpower. And this man is indeed a living example of such.

Mariyappan is now looking for a salaried job to support his family further and we can hope the very best for this living real-life fighter.