One such is the story of Jockin Arputham.

Every day he wakes up, the first thing that would cross his mind is that how can he help the slum dwellers today. He has been doing this daily since his earliest days in Mumbai. Precisely since he was 18-year-old and had arrived from Bengaluru to work as a carpenter. 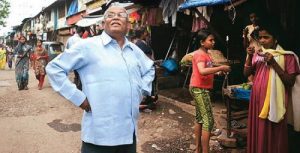 Since then he has strictly observed the sub-human treatment gave out to slump dwellers and did everything from disturbing the municipality, bringing Mumbai to a cessation, to
becoming the messiah of people from the very substructure of the economic monument.

Jockin Arputham had no place to live when he first came to Mumbai so he started
sleeping outside people’s house in a slum.

He soon learned that anyone can climb up this materialistic ladder, therefore, after a few days of working, he launched his own company and began hiring labour from the slums to clear garbage.

This got him some money with which he threw sweet treats for children. His rapport with the kids incited their parents to ask Jockin to open a night school.

Living in the slums made Jockin realize that people here are subjected to severe injustice.

In 1970, the land was to be evicted for building an extension of BARC which became a
peril, and gave rise to the slogan ‘No eviction without alternative’. Moreover, this united 1200 slums in Mumbai.

He took the protest to Delhi in 1975 and sat in front of Indira Gandhi’s once for straight 18 days.

Jockin was arrested on May 17, 1976. A force of 12,000 policemen threw 70,000 residents out of their homes. In various drives, Arputham was arrested 60 times, sometimes on paper and sometimes in person (Yes, Indian laws work in funny ways indeed).

One day, Parveen, a slum-dweller, saw bulldozers outside her home when she was living with her one-month-old son. She had hardly removed the bamboo support from shade when Jockin came with a stay order and saved someone’s world.

We wouldn’t bathe for days, we’d smell, our hair would be wild. No one would come near us, but Jockin sir would sit with us and eat.

He has special concerns for women who mostly work at construction sites or house
helps and live in makeshift homes. The concern was mostly regarding their money which their husbands would snatch and exploit in alcohols and drugs, leaving them to starve for no reason. The absence of an address proof forbade them to have a bank account which is why they stored their savings in their homes.

Jockin has helped many such women who revere him.

Today at the age of 67, he still sits in the recreated eight-storey building in Dharavi slum. 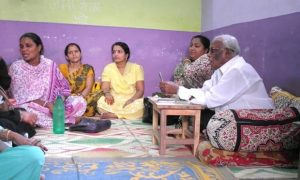 He received Magsaysay award in 2000 and has been nominated for Nobel Peace Prize. And today, Arputham has moved many slum dwellers to seven-eight storey buildings which is a winning milestone in itself.

Though, he still asks-

Who is at fault, the rich or the poor? The answer is none. India needs population control and better job opportunities to bring more awareness to the governing bodies.