Starting from scratch and touching the highest of zeniths is not a one day task. It takes a clear-cut vision and hardest of efforts to take out the rewards of business from becoming an entrepreneur.

Along with the idea in the mind and guts running inside the veins, a lot of composure is required to endure the essential setbacks on the face.

One such inspiring entrepreneur is Surajmal Jalan. 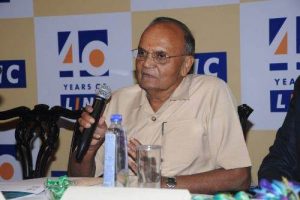 Sixty years ago, Surajmal landed on the soil of Kolkata without a single piece of a penny in his pocket.

Today he owns an empire worth crores. His business ranks among the biggest industries in this sector with a mind-boggling turnover of Rs 350 crore per annum.

Surajmal is the founder of Linc Pens that celebrated its 40-anniversary last year. Yes, the same Linc you might have used in your high school days or still might be using every day.

Surprisingly, Linc exports almost one crore units of pens abroad to around 50 countries every year.

Surajmal was born into a very humble family of Rajasthan’s Shikar district. His father was a retired man and running the entire household was by default on his poor shoulders. Being fifth in the family of six children, he was of course pampered while growing up.

However, at a young age of 19, Suraj decided to make something of his life on his own.

He asked his family to allow him to leave for the city. They agreed upon a term that he gets married.

Since he was not ready for another responsibility so he left home penniless.

After reaching Kolkata, Surajmal got his first job in a loc carpet company. He boarded there with one of his friends who used to work in a transport company.

Imagine his condition when he would take his bath on the footpath and eat besides the road.

To save money he would daily walk for several long kilometers to reach his office and then return the same way.

After working for a year in the carpet industry I switched to a comb-making company. I worked there for two years and then on joined a rice mill and then a tea estate as an assistant manager for a salary of Rs. 500 per month.

However, his relentless efforts took a break when he was called back home to take care of his aging parents.

But at home, instead of sitting idle he decided to take up some work.

He purchased pens and started selling them from home to home.

It was only then when he realized that there were no quality pens in our country. So that was it- he decided to start a company that made pens and parts of it.

And this was exactly where his fate took a right turn:

Two years later, he again returned to Kolkata as he had realized that his bigger vision could not be marked wide from a small town.

In Kolkata, he started his own retail shop for pens in the biggest stationary area Bagri Bazaar which later turned into a wholesale shop.

But despite this, he wasn’t quite satisfied. He wanted to open a pen manufacturing company of his own.

It was his in-laws who realized his dream and helped Suraj a lot thereafter. They gave him a room in Maalpaara, Kolkata. He started his business from there by investing Rs 10,000 for making plastic parts of pens. His venture was highly appreciated. However, his dreams were big and he had just made a start.

He started the company from mere 700 square feet with five employees and Rs 700 rent in 1976. He named his brand as Linc –literally translating into ‘connecter’, suggested by one of his friends.

Gradually his business gained momentum and people started appreciating his undertaking when he took the pens all by himself to the wholesale.

At the age of 17, in the year 1980 his son Deepak Jalan started as a trainee and now is the Managing Director of the company.

In 1992, Linc collaborated with Mitsubishi and became the distributor of Uni-ball pens.

The same year, they distributed 12 lakh pens to South Korea.

Pens like Linc Ocean Gel and Linc Smart Gel were runaway bestsellers among most of the school and office goers. In 2005, Linc started its best selling flagship Linc glycerin pens.

In 2008, Linc roped in the King of Bollywood- Shah Rukh Khan as its brand ambassador.

As of now, the legacy of this inspiring man who made the entire India write in style is passed onto his grandson Rohit who will take over his father as the new MD soon enough.