This is the story of Patricia Thomas who considers Marina beach her business school and has won “FICCI Woman Entrepreneur of the Year” in 2010.

Her struggles began when she was 17 and married Narayan against the wishes of her conservative Christian family as he was a Hindu Brahmin. She faced rejection from her father, and to add to her misery the man she married thinking he was the one to bring her a happy life, turned out to be a drug addict. He never had time for their two children.

Patricia had to take matters into her own hand, so she took financial help from her mother. She set up a mobile cart at Marina Beach and to give a hand with selling tea, coffee, fresh juice and snacks she employed two disabled persons.

Soon her dedication helped her to expand her business and run canteens for offices in Chennai. And in 1998, she became the director of Nelson Manickam Road restaurant of Sangeetha group.

Meanwhile, her children grew up and Narayan’s behavior worsened. When he did not get money from Patricia he stubs her with cigarettes and vanishes for months. And in 2002, he died during such a disappearance. It was a woe when after two years her newly married daughter and son-in-law died in a road accident. 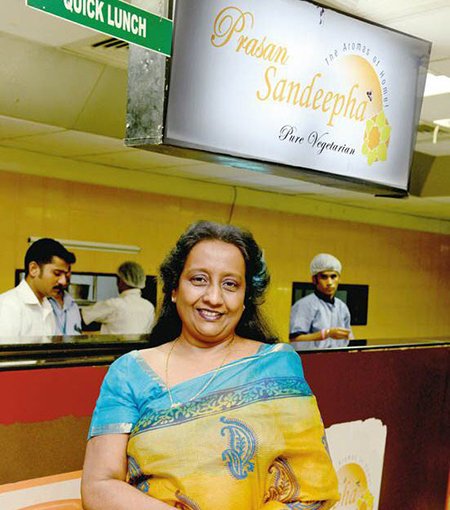 Patricia was completely devastated. Her son started their first restaurant in the memory of her late daughter, ‘Sandeepha’. Since then Patricia has nurtured her restaurant as she would nurture her daughter. Her extreme struggles and determination inspire every woman to stand up for themselves. If it wasn’t for her she would not be able to change her own lifestyle.

She started out with just two and now she has 200 people working for her in her restaurants. According to her, she had reached the crossroads to choose between living or dying and she chose to live. Her self-determination to be independent gave her the boost to make it happen.

She had a passion for cooking which helped her to start out with selling pickles, squashes and jams. From there traveling in a cycle rickshaw to an auto rickshaw to now owning her own car, she is a live example of a success story. From 50 paise a day she has reached to earning 2 lakh each day.