There has been a lot of uproar over the rising prices of onions in the country, but it seems like our politicians don’t care. #sayitlikenirmalatai and #OnionPrice is trending on Twitter after Nirmala Sitharaman gave a foolish statement in Lok Sabha. Nirmala Sitharaman told on Lok Sabha that the rising prices of onions will not affect her personally, because her family does not like things like onion-garlic.

This is the level of insensitivity BJP leaders show. Taxpayer money also pays for her first class travel. Does that mean the common man should stop worrying about rising fuel prices?https://t.co/mHYqSyLSix

Sitharaman said, “I don’t eat too much onion-garlic so don’t worry. I come from a family that does not care much about onions. ”Nevertheless, people did not like her foolish comment thus to these people started trolling her on Twitter. After her statement in Lok Sabha #OnionPrice and #sayitlikeNirmalaTai is trending on Twitter.

I come from a Political party that doesn’t care much about GDP and Economy.#SayItLikeNirmalaTai

People started creating memes and flooded social media with it while many people blamed the Finance minister and BJP (current ruling party) for their failure in keeping the prices of onions under the limit.

*Cows die in UP gaushala*

While the prices of Onions are making people cry, India is currently struggling with unemployment and economic recession. The report of the recent GDP rate is enough to tell it, which has faced the biggest decline in 6 years. According to this recent report, the GDP rate fell by 0.5 percent in just 3 months and the second-quarter GDP figure has reached 4.5 percent. In the current financial year 2019-20, the first quarter GDP rate was 5 percent but now after three months, the rate has increased to 4.5 in the second quarter.

Pic 1- Don’t talk about #OnionPrice Because our FM #NirmalaSitharaman don’t eat onions
Pic 2- Yes, Smriti Irani eat Onions but only when there is Govt of Congress.🙃
➖What about Millennials who prefer to eat onions during BJP govt ?😳 #OnionPrices#SayItLikeNirmalaTai pic.twitter.com/1vVjhWAd8f

This isn’t the first time people are trolling Nirmala Sitharaman. A few weeks ago she made an absurd remark on Millenials and targeted them for the reason of economic slowdown. However, this statement didn’t go well with Millenials and she was trolled badly.

While many people on social media started retweeting the old tweets of PM Modi and Smriti Irani and made fun of them. 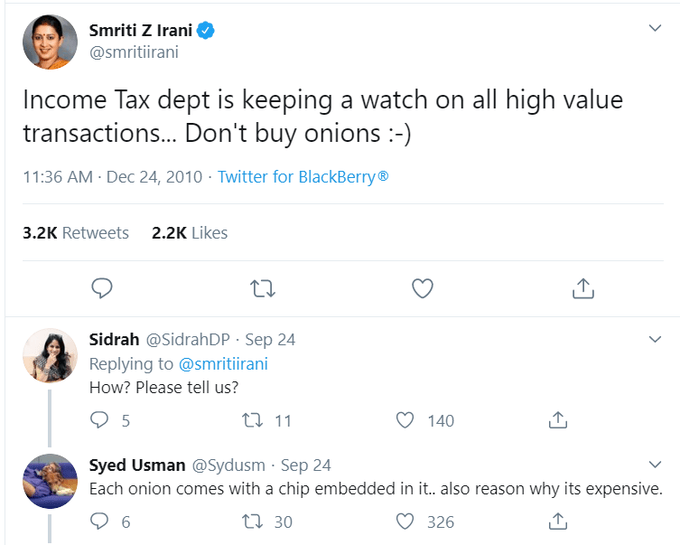 We call you “worst FM ever” for a reason @nsitharaman #SayItLikeNirmalaTai pic.twitter.com/IediYHnCFD

The cost of onions in India is reaching up to 150rs per kilogram. It is even reported that Onions are being sold as high as 200rs per Kilogram. Above all, this is a matter of concern amid the Indian economic slowdown.

So, Nirmala Tai said “I don’t care about onion, cause I don’t eat onions”