The whole country was taken by surprise yesterday when IAF retaliated to the deaths of 44 CRPF jawans in Pulwama by hurling 1000 kg explosives via an airstrike on Jaish-e-Mohammad camps in Balakot, Pakistan.

Reports state that the Indian Army responded to these violations with a stronghold and destroyed 5 posts that belong to Pak Army. 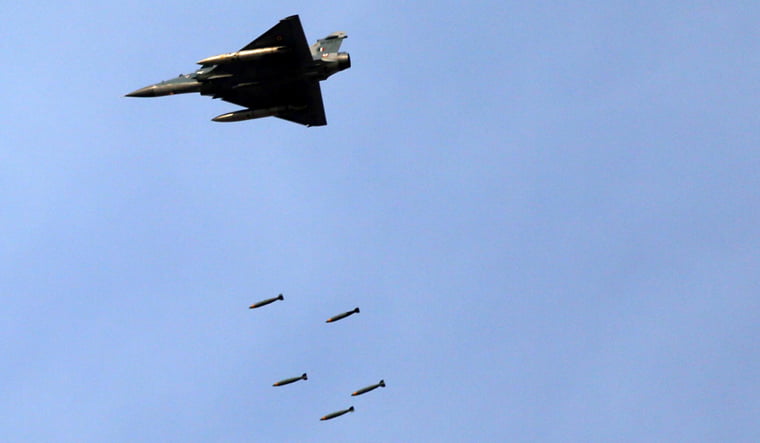 The situation is building tension as the Indian Air Force reportedly destroyed JeM facilities killing more than 350 terrorists by sending 12 Mirage 2000s. The Indian Army, Air Force, and Navy are on high alert.

The facilities were run by Maulana Yousuf Azhar, also known as Ustad Ghouri, brother-in-law of Infamous Masood Azhar, Chief, JeM. Masood is the mastermind behind the Pulwama attack.  IAF carried a non-military action to target the militant camps specifically. Pakistan warned India that it will surprise with unprecedented actions.

Following this threat, the borders in Rajasthan, Punjab, and Gujarat were made ready for any anticipated actions from Pakistan Army.

11:55 AM: Pakistan said that its defense shot down 2 Indian aircraft. Major General Asif Ghafoor, spokesperson, Pakistan Armed Forces, tweeted “In response to PAF strikes this morning as released by MoFA, IAF crossed LOC. PAF shot down two Indian aircraft inside Pakistani airspace. One of the aircraft fell inside J&K while other fell inside IOK. One Indian pilot arrested by troops on the ground while two in the area.”

11:42 AM: As per the government reports, the air traffic in civil segments has been suspended in Leh, Chandigarh, and Kashmir. Commercial flights have been canceled.

11:27 AM: ANI tweeted pictures of a crash site in Budgam, Kashmir. A military aircraft crashed and two pilots are feared dead.

ANI tweeted ‘Visual from the crash site of a military aircraft in Jammu & Kashmir.”Two dead bodies were found in this crash site.

11:19 AM: Pak jets reportedly entered Indian Airspace in Nowshera sector, Rajauri District, J&K and were forced to retrace back due to the intervention from the Indian Army. The Indian fighter jets were on high alert and patrolling this area. They reportedly put the Pak fighters back to their bases.

11:07 AM: An IAF MiG crashes in Budgam, J&K. Two pilots were on that plane and are feared dead.

11:03 AM: Husain Haqqani, former Pakistani Ambassador, told PTI “It is telling that no country has spoken out in Pakistan’s favor after the Indian air strike.” He also added that China is also not protesting India’s violation and striking in Balakot. China put a restraint on all sides.

10:40 AM: Pakistan violated ceasefire and started shelling in Poonch. Mortars are being fired by Pak Army, security officials dictated.

10:35 AM: Shah Mahmood Qureshi, Foreign Minister of Pakistan, said, “I have made myself clear that India has shown aggression. Under the current circumstances, it will not be possible for me to attend OIC (Organization of Islamic Cooperation) meeting where Sushma Swaraj is present.” Pakistan is trying to create international pressure by boycotting OIC.

10:21 AM: As per the report from Geo TV, the National Command Authority of Pakistan headed by Imran Khan, is meeting to discuss and design a response regarding air strikes on Pak terror camps in Balakot. This body is responsible for policy formulations, deployment, exercises, R&D, employment, control on Pak nuclear arsenals, operational command, etc.

10:15 AM: As per the report from India Today, the Indian Army, Indian Air Force, and major intelligence agencies rehearsed before the airstrike was conducted. It was coordinated in the presence of Ajit Doval, NSA. The intelligence of the Indian Army pinpointed the terrorist camps in Balakot, Pakistan.

9:50 AM: Mohan Bhagwat, RSS Chief, said that IAF showed its tribute to the CRPF martyrs of Pulwama. It was a befitting reply to the terror attacks conducted on 14th February. He also quoted Veer Savarkar and told that India needs to be stronger and more powerful as power speaks and everybody listens.

9:46 AM: Minister of Human Rights of Pakistan, Shireen Mazari said at UNHRC, “Pakistan condemns India’s unprovoked aggression on Pakistani soil which is yet another violation of international laws that will disrupt regional peace.”

9:40 AM: Satya Pal Malik, J&K Governor reviewed the security condition, as well as, the law and order in the state with the officials after the airstrike on JeM militant camps. Malik told all forces to be prepared for any unprecedented events. He also praised common people for maintaining peace despite the tension.