Bollywood singer Kanika Kapoor has tested positive for coronavirus in Lucknow, UP. This is the first coronavirus case reported in Bollywood. Kanika had a history of traveling to London, and she landed a few days ago in India. She gave this information through her Instagram post.

The irony is Health Minister Jai Pratap Singh of UP BJP government was also present in this party.

Hello everyone, For the past 4 days I have had signs of flu, I got myself tested and it came positive for Covid-19. My family and I are in complete quarantine now and following medical advice on how to move forward. Contact mapping of people I have been in touch with is underway aswell. I was scanned at the airport as per normal procedure 10days ago when I came back home, the symptoms have developed only 4 days ago. At this stage I would like to urge you all to practice self isolation and get tested if you have the signs. I am feeling ok, like a normal flu and a mild fever, however we need to be sensible citizens at this time and think of all around us. We can get through this without panic only if we listen to the experts and our local, state and central government directives. Wishing everyone good health. Jai Hind ! Take care, KK

However, the terrifying thing is that Kanika attended a party in Lucknow, which had over 400 to 500 people.

As the virus is contagious, people who came in contact with Kanika are now getting tracked down. Currently, she is admitted and isolated in KGMC hospital, Lucknow. Her family and closed friends are also isolated and currently monitored right now. 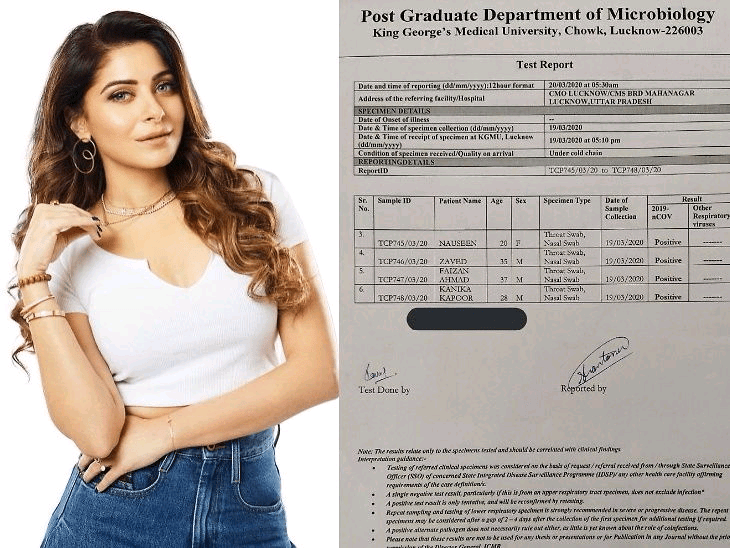 The 41-year-old singer was in London and returned to Lucknow on 15 March. She avoided giving information about this to the authorities and even avoided the 14 days mandatory quarantine. On reaching Lucknow, Kanika met her friends and family in a five-star hotel. According to the report, they attended a party in Lucknow in which many bureaucrats, politicians, and celebrities were present.

Apart from UP health minister, former Chief Minister of Rajasthan Vasundhara Raje’s son Dushyant Singh was also present at this party. In India, 223 coronavirus cases are confirmed till now, with a death toll of five people. The total death toll globally has hit more than 10,000 people.