India is a land of diversity. And perhaps Kolkata is the best place to feel that in the festive season of Durga Puja. The feeling of almost every community gathering at one place to rejoice the worshipping of Maa Durga is something more than just fascinating.

Moreover, the Pandals at Kolkata are damn exquisite and a definitive sight to behold.

This year only, one group called the Sribhumi Sports Club has installed an entire Mahismati Mahal from the recent epic movie Bahubali in less than ninety days. 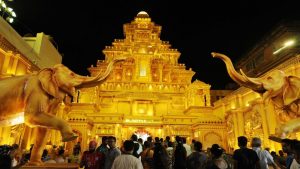 So let’s dig deep and find out what happens behind the curtains information of such huge sculptures that remain abode for the Mother Goddess until the day of Dusshera.

The work actually starts from August itself when the artists and helpers start structuring bamboos and cloth to build the basic framework of one pandal.

These pandal makers come in groups to the ‘Mahanagar’ from various parts of West Bengal. However, the majority of such craftsmen belong to West and East Medinipur, the hub of the handicraft and cottage industry. They also come distinctively from the districts of Nadia and North and South 24 Parganas. 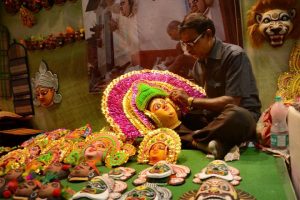 Work on the pandal usually starts six to eight months ahead of Durga Puja. The contracts are being signed in February itself. After planning and designing of a pandal, a budget is allocated upon which workers are enrolled and from August the works commence.

Medinipur alone has an estimated 100 pandal-making groups, also called decorators, who have made a name for themselves.

Most pandal artists have their own teams. Their teams comprise of farmers, masons, carpenters, electricians, painters, etc.

They take care of various parts of pandal making right from the building of the structure of pandal; to covering up the pandal with cloth and different materials. Every artwork, painting, and lighting inside the pandal goes into details and ultimately forms the final caricature. 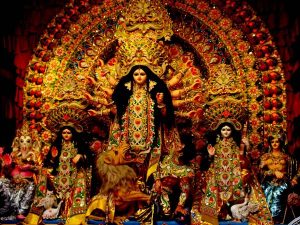 Interestingly, the pandal artists and makers have no such formal training beforehand. They are self-taught when working under someone.

Like all traditional forms of folk art that are handed down from one generation to another, most pandal makers have gained their knowledge of pandal making as children working with their fathers or someone who is adept at the craft.

Currently, from a business point of view, the pandal art space is seeing competition hotting up as urban, professionally trained artists, including Bhabotosh Sutar, Susanta Paul, Shibsankar Das, Purnendu Dey and Sanatan Dinda, are pulling out all stops to assert their trained sensibility of art.

Moreover, the participating pre-exciting artists are paid much less due to their academic credibility.

However, this class distinctions- the urban versus the rural, trained versus self-taught, can expect to see some interesting collaboration in the future, engaging audiences to a degree that is rarely encountered in the world of art and craft.