Supreme Court orders that Central Govt within 3-4 months formulate scheme for setting up of trust and hand over the disputed site to it for construction of temple at the site and a suitable alternative plot of land measuring 5 acres at Ayodhya will be given to Sunni Wakf Board. pic.twitter.com/VgkYe1oUuN

Hindus always believed that Ram’s birthplace was inside the mosque. Muslims prayed on the inside while Hindus prayed on the outside. According to media reports, the court said that it does not matter when the mosque was built. The court rejected the Nirmohi Akhara claim.

The Supreme Court is giving its verdict on the Ayodhya dispute. First, the Chief Justice told the Shia Waqf Board to dismiss the petition. After this, the claim of “Nirmohi Akhara” has also been rejected. A five-judge bench headed by Chief Justice Ranjan Gogoi is delivering the verdict. The court has also said based on ASI report that the mosque was not built on vacant land. At the same time, the court said in its decision based on the ASI report that there is no strong information about breaking the temple and building a mosque. 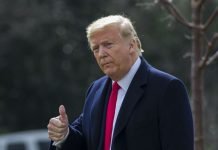 Donald Trump’s India visit: India To Get drones and helicopters from the US